Methods
The research was carried out in the context of an introductory course on computer-based and web-based training (CBT/WBT). Students were invited to complete an online questionnaire covering a broad variety of relevant attitudes and experiences.

Results
While the vast majority of students have adequate computer abilities and see the benefits of interactive and multimedia-enhanced learning materials, a tiny fraction lacks fundamental computer skills and/or is suspicious about e-learning. There is also a continuous if minor, gender disparity in computer infrastructure and Internet access. In terms of student views toward e-learning, we discovered that age, computer usage, and prior computer exposure are more influential than gender. A large proportion of students, 12%, make little or no use of current e-learning options.

Conclusion
Many students might benefit from a rudimentary introduction to computers and the university’s related computer-based resources. Given the diversity of computer abilities among students, a single computer course for all students would be neither beneficial nor acceptable. Special precautions should be made to ensure that pupils who lack computer skills are not disadvantaged or acquire computer-hostile attitudes.

Background
Computer literacy has been a focus of educational research since the introduction of personal computers into the classroom, either as teaching aids or as self-study tools. In the 1980s, computer literacy research focused on whether medical students were prepared for the expected omnipresence of computers in the professional contexts of future physicians [1-4], i.e., if they had the essential computer skills [2, 5-9]. The vision of a knowledge-based society saw future economic wealth as being dependent on people’s ability to deal with increasing information loads and adapt to an ever-changing work environment [10-13]. Computers were expected to become ubiquitous tools for managing medical knowledge. A privately owned computer has been made a requirement for medical students in some medical schools [15, 16]. 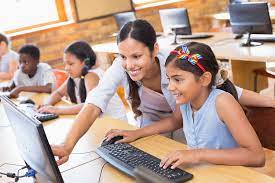 E-Learning, particularly the use of learning management systems (LMSs), added a new dimension. According to the researchers, some students may lack the necessary skills to effectively use web-based learning platforms and thus are disadvantaged. This topic is frequently brought up in the context of gender differences. The main concern is that female student are at a disadvantage due to differences in computer usage patterns, such as a less dominant discussion style in web-based communication [18, 19]. Gender differences in computer-related behaviors, as well as attitudes toward computer-based and web-based training (CBT/WBT), can be observed. According to a Danish study, 46% of first-year students were in favor of replacing “traditional teaching with the use of computers if possible,” while only 22% of women agreed.

In 2004, 80% of 20-29 year olds29-year-olds in Austria had Internet access, and 75% of university and high school students used a computer daily. As a result, we can assume that most university students have basic computer skills. Nonetheless, studies show that there is a significant difference in computer use based on students’ disciplines. According to Middendorff, German medical students spend an average of 8 hours each week on the internet (including private activities). This is the lowest figure of all specialties, making broad studies regarding medical students’ computer usage difficult to conclude from. Often, students’ “informational fluency” remains at a basic level, and they overestimate their computer skills.

This study looks at the computer literacy and usage patterns of first-year medical students at the Medical University of Vienna. It was carried out in a CBT/WBT introduction course for first-year students. The study’s goal was to determine the need for such introductory courses and to provide information on how to improve them. A secondary goal was to identify challenges that might arise in the implementation of a university-wide LMS due to students’ lack of computer literacy or low acceptance of e-learning. While multimedia learning programs have been lauded for their educational superiority, their actual use has occasionally fallen short of our expectations.

A certain amount of computer and information literacy, including online communication abilities, is required.

Students will be introduced to the computer and web-based learning resources.

In 2003 and 2004, students were required to review web-based learning programs (for example) and post their responses in a dedicated online forum. We used a platform created by students in the first-year course. We used Manila in 2003 and TikiWiki in 2004 as collaboration tools in the course for second-year students. We switched to tools that were partly self-developed and less demanding in terms of server load in 2005.

This paper presents findings from an online survey administered to first-year students in 2004. The survey was completely voluntary and anonymous (though students were asked to give their student ID if they wanted to). The tutors were unable to determine who completed or did not complete the questionnaire. Using class time for students to complete the questionnaire resulted in a 79% response rate.

A total of 1232 questionnaires were completed, with 1160 remaining in the data set after some filtering rules were applied to eliminate records of unknown origin. 61% of respondents were female, while 39% were male. This matches the gender split of the 1560 students enrolled in the study module (61% female and 39% male). As a result, we conclude that our sample was typical of the cohort in 2004. Tables and figures do not reflect missing data owing to non-response. Missing replies account for the differences in reported counts and sample size (n = 1160).