The phrase “moral education” has been defined in a variety of ways by several academics throughout the years. The phrase has no established definition.

To put it in short and simple terms, moral education may be defined as the imparting of values that discern between good and evil. Finally, your behavior and intentions toward other people are governed by this set of values. Academicians and intellectuals have argued over whether or not moral ideals should be taught in schools for ages. Many people hold the view that moral and ethical principles can only be learned via observation of peers and elders in action. 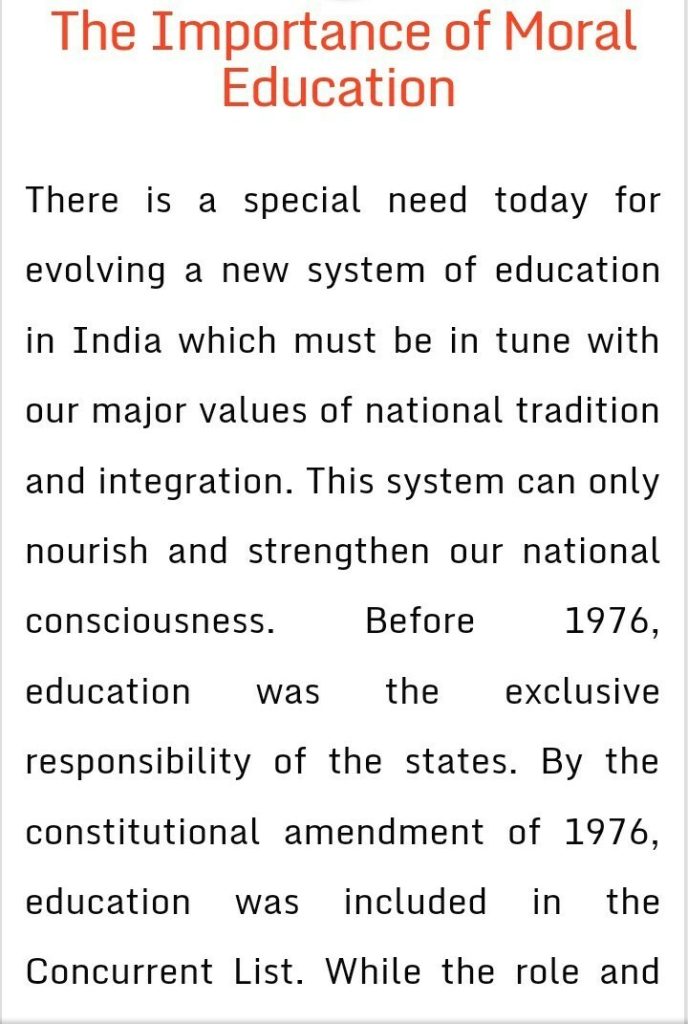 The main concern in this situation is how we can tell a correct deed from a bad one if we are not instructed to do so. One individual may see a certain action as right while another sees it as wrong.

To make communal life possible, a certain set of values and morals must be widely consolidated. Moral principles in education are just as significant as a Ph.D.

Despite how long the argument over implementing moral instruction in schools may continue, its significance cannot be denied.

Following is a summary of moral education’s goals.

Moral Education Needed
“Educating a man in intellect without educating him in morality is to educate a threat to society.”

The globe has become a global village as a result of the internet and technology’s recent fast expansion.

The globe has shrunk in size thanks to telecommunications, which also allows for high-speed communication and tighter connections between various groups.

To encourage communal life in today’s fast-paced society, ethics, values, and morals must be introduced. Never before have people felt the need for moral education so strongly.

According to surveys, academic achievement and behavioral tendencies among pupils drastically declined in the first half of the 1980s. The phrase “character” was then reintroduced by educators in their tutoring sessions.

Character is characterized as an individual’s distinctive moral attributes. Teachers placed a strong emphasis on developing pupils’ moral character and getting rid of negative habits.

At that time, educators thought that instilling moral or ethical ideals in children at a young age would promote social peace. Therefore, it is obvious why moral education is important.

Values of Morality and Ethics
“The most important human endeavor is the strive for morality in our acts,” once stated Albert Einstein. Our basic life and internal harmony rely on it. Only moral behavior can give life beauty and dignity.

Although the terms moral and ethical are increasingly often used interchangeably, in reality, they mean completely distinct things.

Morals are more closely akin to values that help to define a person in society. Morals are principles that uphold and appreciate human life.

not just one’s own life, but also the lives of others around them. Every moral principle serves to improve people’s quality of life. It is important to recognize that moral standards might vary depending on the circumstances.

For instance, respect and honor for oneself and others are two fundamental moral principles in today’s culture. The same honor, nevertheless, may be misinterpreted as showing disdain and arrogance to someone else to maintain one’s dignity.

Therefore, the true moral value of honor should be taught as a universal respect and honor for another life, regardless of outside influences.

A person who practices ethics, on the other hand, is someone who has moral principles and shows a desire to behave properly, even when it is difficult to do so. If a person upholds and lives by moral principles, they are considered to be ethical.

It is unrealistic to attempt to identify a set of well-defined moral or ethical standards.

However, for a healthy community, moral and ethical standards that should be upheld by everyone have been established by religious books, philosophers, and preachers.

However, religion has nothing to do with morals and ethics. The ideals are more about acting gracefully and harmoniously in a civilized community.

2. Personal and Social
How each person acts toward himself and the society at large is moral education for the individual and the community.

Building a person who will be a member of a larger community is the main goal.

Humanity and the country have been formed in part by the goals of our ancestors and the wisdom of great thinkers.

4. Instruction in Culture
Cultural education is closely related to the tenets of civic education and is a crucial component of moral education. The practices and traditions of a specific country or ethnic group are referred to as its culture.

Why Should Schools Focus on Moral Education?
“Education without morality is like a ship without a compass, just drifting about,” said Socrates. Martin Luther King, Jr.

Elders at home are the first to instill moral values in children. However, this education continues even after the child is old enough to go to school.

providing value Years of comprehension and ingestion are necessary for education. There are various levels of perception associated with each child’s age and stage.

Therefore, it becomes essential that teachers carry on this education in classrooms to maintain the continuity of moral instruction provided by parents and other household elders.

The center and the soul of a child’s life are their schools. A child’s formative years are the most crucial. The child’s character may be shaped and established at this point.

The most significant influences on young susceptible brains are friends and school instructors. Establishing a set of moral principles that will be taught in schools may greatly help students develop their character.